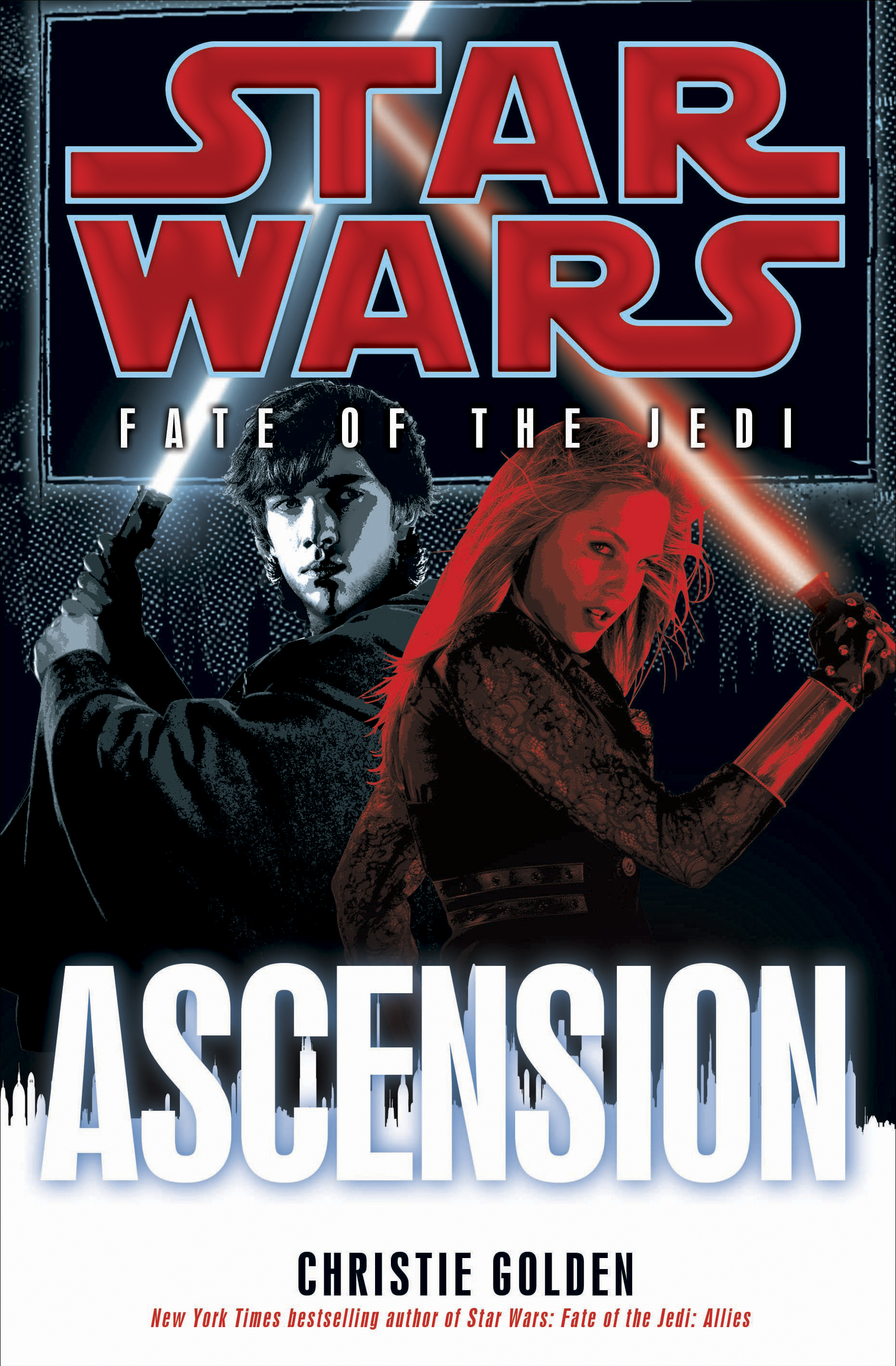 Item Added: Star Wars: Conviction. Also, didn't Allana have her hair dyed black so her Hapen ascendancy wouldn't be so obvious? Oct 03, Ithlilian rated it liked it Shelves: fantasy. Another decent installment in the series, though maybe one of my least favorite. Plots are progressing, Skywalkers are visiting new weird planets, trials are ending, governments transitioning, slaves rebelling, the usual. The hunt for Abeloth is still my least favorite part yet it seems like that is supposed to be the main focus. The strange force planet in this book didn't interest me at all really, which makes this one the weakest of all the books so far.

I still care about the side stories an Another decent installment in the series, though maybe one of my least favorite. I still care about the side stories and all the characters, but the central storyline needs to be kicked into high gear soon. It was fun, but not that much happened and the plot has stalled. Nam Chorios was cool, especially exploring how the force was used there. And how using it could cause force storms. I couldn't root for Vestara this time because most of her actions were explained by a "surprise" twist later.

So I didn't really know that she was actually up to for most of the book and was generally confused by her actions.

Tahiri's trial has gone on for so long now I was just glad that it was over. Feb 25, Luke rated it really liked it. As a Star Wars fan I liked this book, but overall I'm finding this series to be a little lacking. Perhaps more of a focus on the younger newer heros of the Star Wars universe rather than the constant trotting out of Luke, han, Leia and the rest.

I feel there hasn't been a good Star Wars story arc since the Yuuzhan Vong series. Jun 25, KevBayer rated it liked it. Not as boring as the previous books in the series. Starts out blah, but picks up about half-way through and becomes an okay book. This particular Star Wars series is just not that great. Too many characters to try to fit into each book. Seems like they should make stories that focus on a smaller group of characters. Sep 14, Balkron rated it liked it Shelves: fantasy , reviewed , phone , space , adventure.

I can't believe I read it once 3 Star - Average book, Was entertaining but nothing special. I can't wait for the next book. I Will Re-Read this one or more times.

I feel I should have waited on this.

The character development was not as detailed as I would have liked but it was adequate. Story - This is a continuation of Star Wars, if you like Star Wars then this story helps expand the story with a focus on the new Jedi Order. Overall - This is an average book. Mar 09, Christian Santos rated it really liked it. If there was something enjoyable about this novel, there's a-plenty I can tell. But as far as I'm concerned, this one was a near one-shot miss of a novel. The late Aaron Allston manages to keep a very good pacing in the story line in this installment of FOTJ, but nearly misfires for me- I just kind of stumbled in Nam Chorios as a very backwater, nothing-notable-or-special type of world for Abeloth to be in, really -and it's just nearly sad.

I liked the unexpected twists in the story. Daala gets re If there was something enjoyable about this novel, there's a-plenty I can tell. Daala gets rescued by the Manda'lor yes, the frickin' Mandalore! Boba Fett unexpectedly plus with a surprise flair , Tahiri escapes as a convict obvious in the story but I never expected her to be joining Daala in the escape , and Han finally does something smart for once! I hated Makes me reminisce on the terrible Planet of Twilight book by Barbara Hambly no offense taken. Of Star Wars books. Jun 06, Anja Braun rated it it was ok Shelves: science-fiction.

This books started out good with the continuation of Valin and Jysella's story but the continuing saga of Ben, Luke, and Vestara was a bit of a bore to me.. Don't get me wrong if it had focused on the true reason of this ten year trip I would have been interested-the whys of Jacen's downfall.. What I didn't find at all interesting was story after story about Abeloth.

Tahiri 's story progresses and also Daala's so that is something I guess.. Allana has premonitions about her mom and foils the atte This books started out good with the continuation of Valin and Jysella's story but the continuing saga of Ben, Luke, and Vestara was a bit of a bore to me.. Allana has premonitions about her mom and foils the attempt.. So the ending is no surprise.. It is open ended meaning you have to read the next book to find out about Daala.. Hmm I find this aggravating after awhile.. It is just a ploy to get U to buy more books.. Oct 18, Gina Guesby Mays rated it really liked it.

It wasn't bad, but it was slow to get started. I know I should have read the other 6 books beforehand but this one was available to rent. I like the little granddaughter and I like that Leia and Han are still very active and fight, but so many different stories are going on and they don't sound like they are the main characters anymore. I will have to go back and read the first book in this series.

Jan 11, Tait Sougstad rated it liked it. One of the better in this series. Still not a good book, if not graded on a curve, but the plot threads intermingled, characters developed a little, and nobody said anything like "noob" in the dialog. May 16, Shane Bowman rated it liked it Shelves: Liked it. Jul 21, David Barney rated it really liked it. I liked how this book played out. It was good. Enjoyed it. The series has been great.

Can't wait to finish the other two books. Mar 27, Darryl Dobbs rated it really liked it. I'd actually give the story a 3. The nine-book series should be a trilogy, I still stand by that. Started to tie up some loose ends and made me want to go back and read some of the older books. Just wasn't the best book out of the series so far.

Jun 26, Ingrid rated it really liked it. The book seemed to end abruptly and a little anticlimactic. I guess it ended on a cliffhanger. Nov 17, Nicholas rated it it was ok Shelves: star-wars. I feel like the books in this series are following a cycle. Golden develops the Sith, showing where they came from, their homeworld, their history and develops the love interest between Ben and Vestara, Denning deals with the epic showdowns with Abeloth and between the Sith and Jedi, and Allston mainly develops the political changes that are happening inside the Galactic Alliance.

Fate of the Jedi Conviction

Some authors are better than others at weaving the fabric of events together across the entire galaxy, but it feels more and more as this series winds down that the better author is doing clean-up from the mess created by the others. It's hard to say what each individual author is attempting to achieve within each individual story.

Rather, new plot elements are introduced and layers are added with no real satisfying resolution of what came before. Conviction succeeds, in part, because it does start to resolve some of the things that have been brewing in the story for the past six books, and does so in ways that are intriguing and, like all good narrative, leaves potential for further conflict and new direction. The slave rebellion backdrop finally pays off and provides a believable and legitimate excuse for a Jedi coup, and the political intrigue on the part of all factions involved is intricate and sufficiently elaborate to draw this novel above the soap-opera-esque nature of the series so far.

The moral and ethical questions raised by a peacekeeping order seizing government power by force with the intention of righting things is a timeless historical one and doesn't come off as cliche although perhaps that's my own nerdy political bias. I do have to say however, that Daala's descent into dictatorship seems rather abrupt and unbelievable, and there's been no consistent characterization of her throughout the series.

In some novels, she appears an embattled politician genuinely trying to manage an impossible political situation and restore some semblance of order and balance to a diverse and war-torn galaxy. In others, she appears callous; devoted to order at the expense of liberty and as concerned with obedience as a totalitarian dictator. While her spat with the Jedi leads to some believable extremes in her attempts to rein them in, her other political divergences seem much less believable.

Anyway, the radically different characterizations confuse the reader. You don't know whether to feel sorry for her or despise her. I'm all for gray areas, but there seems no believable regression of character - just boom, Daala's an evil dictator the likes of Palpatine.

Attempts to humanize her fall flat and feel disingenuous and it does no justice to the character's potential. These political developments hold the most interest for me as the story progresses. The more "thrilling" and "exciting" developments with Abeloth seem more and more contrived.

I just don't see why it's important to keep that part of the story going any more. The mysterious Jedi illness is no longer a mystery and Abeloth's intentions remain unclear and the Sith seem like petty and incompetent wanna-be tyrants - and I think that's the point. Not one of the adversaries introduced in this series, whether it be Daala, Abeloth or the Sith, have a plausible or well-developed motivation for any of their actions. Galactic domination? Sure; why not? There's no personal motivation for the reader to identify with or even understand and so their actions seem incredible, a series of motions that typical bad guys go through.

The problem is, even casual, non-analytic readers can't help but think, "Why? Since the announcement of the ending of this series, I can't help but think that the novels leading up to it are nothing but filler - that the resolution the authors intended is already there and they're just milking it to get to that point. It's the drawback of these long, extended story arcs and I wish they'd get back to standalone novels or trilogies by single authors.

Oct 06, David Collier rated it it was amazing. The series is still going strong with this one. These are written very well if you love the Star Wars Universe. Sep 20, Darren Vincent rated it liked it Shelves: Started out pretty good but ended on a mediocre note. More than halfway through the book and I thought to myself that I was glad that the Sith hadn't shown up, only for them to make an appearance toward the end.